Eyegrade 0.8 has been released! This release includes several changes from the point of view of the final user:

Installation procedures have been changed. Check the new quick start guide for instructions, also accessible from the documentation page.

Access the binary files for this release at the downloads page.

Khuất Văn Quyên, an eyegrade user from Vietnam, has created and published a video tutorial in Youtube covering topics such installing eyegrade on Windows, using it to grade exams and creating answer forms in Microsoft Word. Texts are in Vietnamese, but don't worry if you don't speak that language, because you should be able to follow the video and get most of the information despite of that.

Thanks a lot for this contribution!!!

Eyegrade 0.7 has been released! This release includes two main changes from the point of view of the final user:

Installation is much easier now than before. Check the new quick start guide for instructions, also accessible from the documentation page.

Access the binary files for this release at the downloads page.

The fix in Eyegrade 0.6.3 for issue #108 (the accept button remains sometimes disabled in the edit student id dialog) didn't actually fix the problem in some situations. I've released Eyegrade 0.6.4 with a fix that I hope finally solves the problem.

I've released Eyegrade 0.6.2 today. This release fixes a severe bug when grading exams without scoring and fixes also issues #104 and #108.

I've just released Eyegrade 0.6. This release includes just one main feature that the users that don't build their exams with LaTeX will find useful: there is no need anymore to edit an exam configuration file (the .eye file) manually. Now you can choose, when you create a new grading session, to configure the session from a configuration file or manually through the user interface: 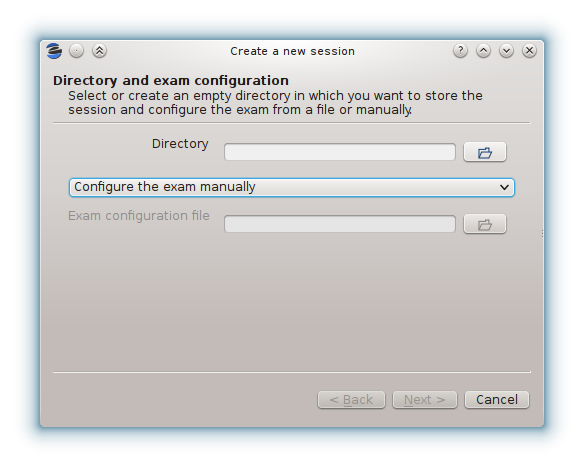 This feature has been developed by Jonathan Araneda from Chile. In addition, Roberto González set the requirements for this feature, provided quite useful suggestions, tested the new code and sponsored Jonathan's work. Thanks to both of them for their useful contribution! 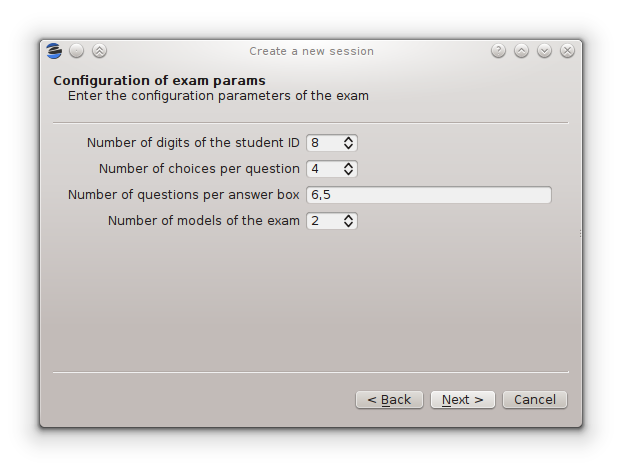 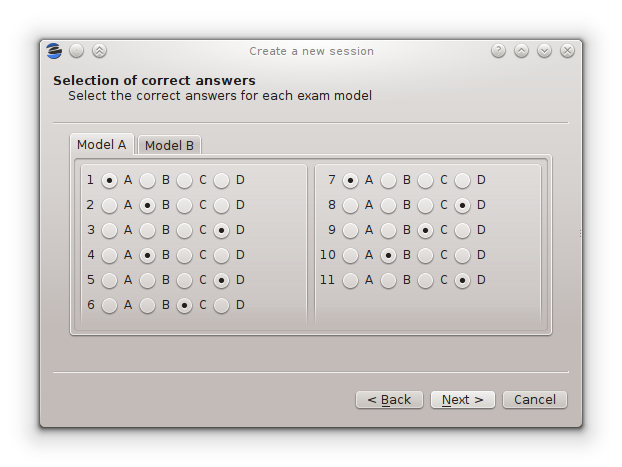 These dialogs are documented in the user manual. In addition, the configuration you entered can be exported as a configuration file so that you or your colleges can create new sessions with the same configuration (see the Tools menu).

But wait, what happened to the new OCR system that I announced for the 0.6 release? Unfortunately, I have to leave it for later. Although it is ready, it depends on some other changes regarding the installation procedure that are not yet finished. I prefer to keep them for the next release in order to avoid delaying the session configuration feature.

I've released Eyegrade 0.5.1. This version does not include any new feature, but addresses a bug that caused an empty spurious exam to be stores in the session database through the capture exam feature, when used before the answer table of the current exam were detected at least once. Eyegrade would refuse to open this session anymore. This release prevents the spurious exam to be stored in that case. Additionally, it allows Eyegrade to open the session even when such an exam made its way into the session database.

Even though version 0.5 was released just a couple of weeks ago, the next release, 0.6, is approaching. As I did with the previous release, I'll blog about the new features it will include as they are more or less ready.

The first feature I'd like to talk about is a new subsystem for recognizing handwritten digits, which replaces the one that I wrote in the early days of Eyegrade. Rodrigo Argüello, a former student of mine at Universidad Carlos III de Madrid, volunteered to improve the previous system with a machine learning based solution. More specifically, he used a support vector machine (SVM). The machine is trained by showing it lots of samples of each digit, and telling it which digit each sample represents. Once trained, you can show an image of a digit to it, and it will answer with the digit it considers the best match for the image.

Rodrigo tried with several strategies before finally integrating one into Eyegrade. Our first tests in real scenarios show that, under conditions in which the former system failed approximately once for every 6 student identifications, the new system fails approximately once for every 20. I believe it is a big step forward. Many thanks to Rodrigo for his great contribution, and to Roberto for sending us tons of samples for training and testing the new system.

Removing the old digit recognition system provides a second benefit: the tre library is no longer needed. The fact that it wasn't a pure Python library, and that it doesn't seem to be widely used from Python, was a headache for deploying the Windows version, and complicated the installation procedure in Linux a little bit. If everything goes as planned, you can expect a greatly simplified installation procedure, especially for Windows users. More on this topic on my next post.