I've just released Eyegrade 0.4.4. This version fixes a bug introduced by the bugfix of version 0.4.3. Version 0.4.3 solved the problem for the older versions of Python, but inadvertently introduced exactly the same problem for the newer versions, which were previously unaffected. I've reverted the erroneous fix and solved the problem in a better way. This new version should be able to export grades in any 2.6 and 2.7 version of Python, both Windows and Linux.

This is the only change with respect to version 0.4.3.

As always, if you have installed Eyegrade through git, you can easily update the program by executing the command git pull from inside the directory in which Eyegrade is installed.

I've just released Eyegrade 0.4.3. This release fixes a bug that made the functionality that exports grades fail when the program is run with the Python 2.6 version I distribute for Windows. Linux users with a reasonably recent version of Python were not affected. This is the only change with respect to version 0.4.2.

If you have installed Eyegrade through git, you can easily update the program by executing the command git pull from inside the directory in which Eyegrade is installed.

The official way of editting your exams for Eyegrade consists of creating an XML file with the questions, running on it the create_exam script provided by Eyegrade and compiling the resulting files with LaTeX in order to get the final PDF documents.

Although exams can also be edited with a word processor such as OpenOffice or Microsoft Word (see Creating the exams in a word processor), following the official way has some advantages:

However, editing an XML file and dealing with LaTeX may scare some users that are more used to graphical word processors. In order to make the procedure more approachable, the user manual describes now more in depth how to edit exams the official way in the section Editing exams. Suggestions on how to improve that section further are most welcome.

I've released eyegrade 0.4 (actually, eyegrade 0.4.2 after a couple of minor changes and a bug fix). There is only one main change in this release with respect to the 0.3 series, the ability to export grade listings from the user interface.

When you select in the menu Exams / Export grade listing you get a dialog like the following one that allows you to configure the export options: 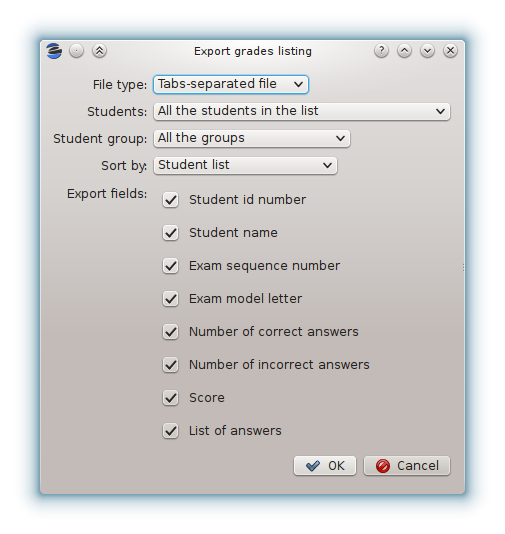 This new feature is easier to use and more flexible than the mix_grades script that was available in the previous versions. The script is now obsolete and will probably be removed in the future.

I've just released eyegrade 0.3. The main changes in this version are:

If you have installed eyegrade through git, you can easily update the program from versions in the series 0.2.x by executing the command git pull from inside the directory in which eyegrade is installed.

If you find bugs or problems with this new release, please open an issue at the GitHub project page, or just let me know by commenting on this post or sending me an email.

I've just moved Eyegrade to a new Web location at eyegrade.org. These are the important links:

Requests for the old addresses will automatically be redirected to the new location. However, the old server may be down for some periods of August. In fact, the frequent downtimes of the old hosting are one of the main reasons for the change. During those downtime periods redirections won't work. However, the new addresses will work properly even in that case.

The new website is hosted at the GitHub Pages service. My experience so far with this service has been very satisfactory. The availability of the website with the new hosting will definitely be much better.

I'm planning the next major release (0.3) of Eyegrade for September. There are some features I have in mind, but listening to the users from time to time does not harm ;) If there is a feature you are especially interested in, just let me know by commenting on this post.

Apart from some polishing here and there, these are things I'm thinking about:

I won't have time for all the features in the list, so you can help me to prioritize. Of course, you can also request features not in the list ;)

Eyegrade 0.2 has been released! It features the shiny new PyQt-based user interface that I showed in previous posts.

The Eyegrade User Manual contains up-to-date instructions for using the new interface. If you have Eyegrade 0.1.x installed, you need to install PyQt and change the value of an environment variable. See the section about upgrading Eyegrade.

This new user interface will facilitate other usability improvements in the future, such as the possibility of reviewing previously graded exams, editing the student list, writing grades to disk in several orders and formats, etc.

If you experience problems with this new version, please let me know by commenting on this blog or posting an issue at GitHub.

I've been working on the new session dialog. Now it is a wizard with three pages. The main novelties are that:

You can try the new dialog in the development branch at GitHub, and see it this screenshots gallery! 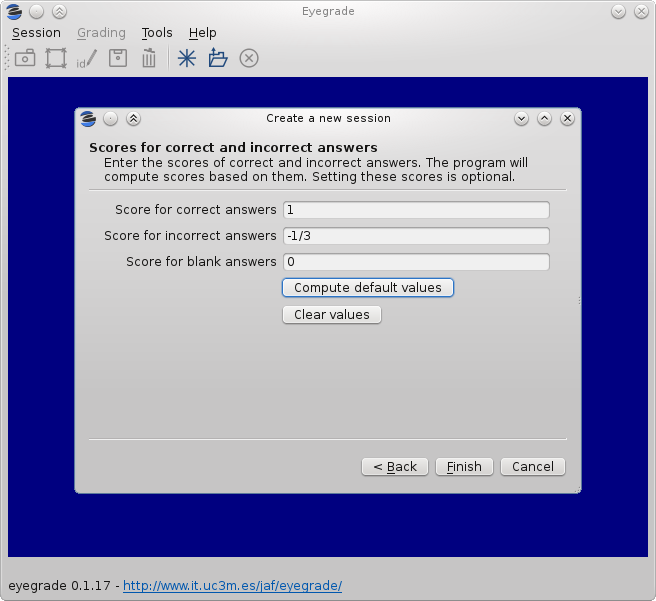 This new dialog will appear in the 0.2 release. I have in mind for a future release the possibility of entering the exam configuration from the new session dialog, as an alternative to reading it from a file. This may be handy for users who do not create the exam with the command line tools that Eyegrade provides.

Comments and suggestions are welcome.

I'm programming from scratch the graphical user interface of Eyegrade. The old user interface uses Pygame. It allowed me to build the first interface of the program very quickly, but its lack of graphical components (buttons, dialogues, menus, etc.) was preventing me from programming a more user-friendly interface. I've decided to use PyQt for the new interface. Why PyQt? I programmed a game with Qt in C++ many years ago, and I liked the library a lot. With the python bindings, it is even easier to use.

The new user interface will be released with Eyegrade 0.2 (hopefully, before the end of January). Check the first screenshots gallery! 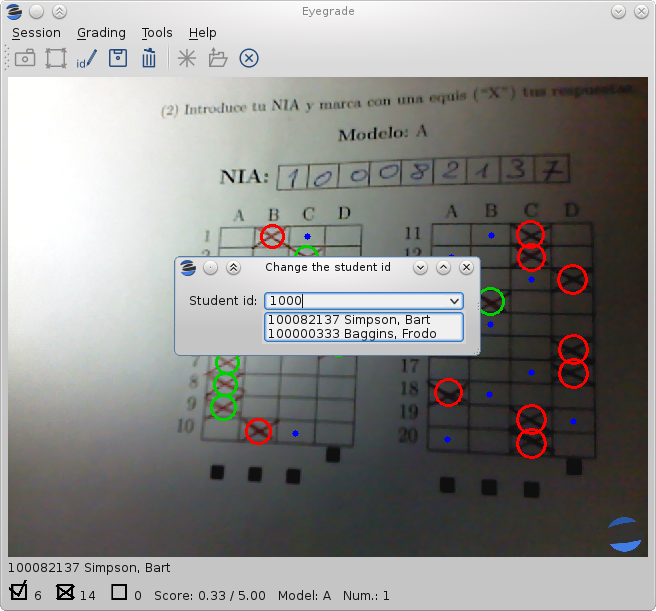 Right now the program does more or less the same as the old interface, but it will be easier to add new features in the future.

The brave can give it a try before the release (it is available at the development branch of Eyegrade at GitHub). Suggestions are welcome (just post a comment here or write me an email.) I have tested it only in Linux, although it should work in Windows too. If you try it, notice that: